If It’s Been A Trend, It Won’t End

Sadly, life is replete with examples of people who can’t (or won’t) get out of their own damn way.

We’ve humorously and anecdotally explained this phenomenon here and here as pertains to decision-making and badly targeted selling, respectively.

The other day, we were having a lively conversation with a friend about people who, for whatever reason, continue to engage in negative behaviors, hang out with the wrong crowd, and refuse to grow.

Perhaps they don’t know they can change.

Perhaps their own unique experience informs them there is no way they can change.

This, in itself, is sad.

What’s worse is that

People Will Make The Dumbest Attempt, Every Year, To Rectify This

We call these “New Years Resolutions” – and they’re guaranteed to fail.

Go back to the gym on January 1, after two months of ceaseless gorging from a sedentary position.

Start a job hunt through your NYE hangover, because no way you’re staying at that same job you decided to quit seven years ago.

Write it down now so you can just hand it to people on a piece of paper in one year from now. Nothing will change.

Six years ago, we New Years’ Resolutioned to become vegetarian.  Well, actually, we had decided to do it in November, but chose to implement the change right after we got done with a big launch.

What astounded even us was that

Our Last Bacon Burger Ever Was In Mid-January, And We Were Fully Vegetarian By The Second Week Of February

We got so excited about vegetarian recipes, vegetarian restaurants, and all things vegetable, we just got so busy enjoying all the new opportunities we forgot all about the burgers and bacon.

Cooking became fun in a new way – vegetarian food prep won’t give you Salmonella and you don’t get reminded you’re handling something that was recently alive.

Simply clearing the windshield of the old and focusing full-time on the new made it an adventure to embrace instead of an extended funeral for a life being left behind.

Think about these other six success muscles you’ll be flexing. 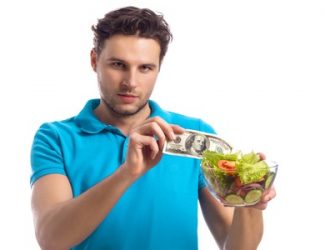 One Hell Of An Awesome Tagline