We at The Morning Adam™ love Winston Churchill.

Providing the “roar” of the British Lion that was instrumental to Allied resistance to, and prevalence over, the Axis onslaught during World War II, was only one of his (many) pivotal influences over the course of history.

When you look at it, his life story and career trajectory up until 1940 is a long tale of occasional successes punctuated by crushing defeats, with a lot of going up against the prevailing winds along the way.

He was cast as an outsider, ridiculed, and ignored. And the more this happened, the more he persevered and stood his ground.

Indeed, his own finest hour came about when the time came for someone to lead resistance against a seemingly inexorable evil wind.

Perhaps This Was Because He Flew Airplanes As A Young Man

Churchill learned to fly on the early propeller planes.  These early airplanes could only gain and maintain altitude and speed by flying directly into oncoming winds (much like flying a kite).

These experiences helped form a metaphor and a pattern – Churchill did his best work against all odds and right in the face of the fiercest opposition.

“To lose momentum, is not merely to stop but to fall.” – Winston Churchill

It also helps explain why his success came late – he was 65 when he finally became Prime Minister, and would hold the office intermittently for 9 of the next 15 years.

And, it sheds light on why he continued to stay active until the age of 90, when the inevitability of mortality finally brought his plane in for the final landing.

What Metaphor Defines Your Trajectory?

Perhaps you already know the answer.

Perhaps you believe you already know the answer.

Perhaps you have no idea.

Regardless, for the next 30 days, pay attention to your speech. Take note of the stories you tell, the expressions you use, the analogies you create to explain things.

What words do you use again and again?

Gaining a handle on this may highlight what defines your trajectory toward success in business and life. Identify it, and determine how to use it to your advantage.

Now, Let’s Wrap Up On A Historical Note

Give yourself the gift of watching this fine documentary on the final 20 years of Winston Churchill’s career and life, from 1945 to 1965.

You may find yourself impressed, amazed, angered, or astonished. Or all of the above. 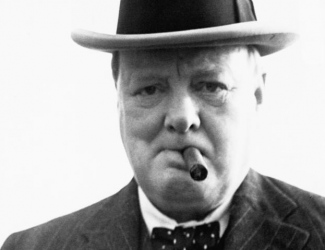